The following is a list of Punjabi newspapers and Punjabi news sites primarily published and distributed in Punjab, Haryana, Himachal Pradesh, Jammu, Delhi, and Rajasthan. 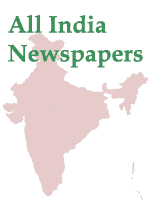 
w3newspapers.com Home   |   Contact us
All information is deemed reliable but not guaranteed. By using this site, you agree to the terms of use.
Copyright © 2009-2023 w3newspapers.com